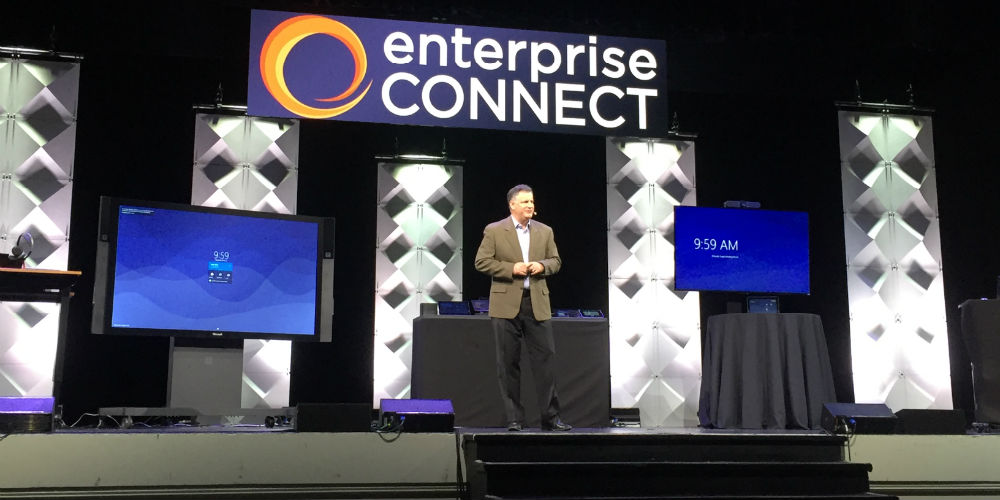 “It seems like every day we’re seeing more and more things in our lives becoming intelligent,” says Bob Davis, Corporate Vice President for Office 365 Engineering for Microsoft. He’s speaking at the Enterprise Connect 2018 Microsoft Keynote, flanked onstage by flat panel displays running Office 365. “We see what happens when things get smart – we save time, we know more, we accomplish more. Simply put, life gets simpler.”

Microsoft’s vision for intelligent communication builds on the work done around Unified Communications. It’s more connected, and treats interactions like a lifecycle. It minimizes contact switches and connects the tools we use to communicate and collaborate. It’s insightful and provides us with analytics about our communication habits. It’s proactive and anticipates what we need.

Microsoft is trying to make life simpler for organizations that utilize Office 365 and Microsoft Teams. Names Best in Show at Enterprise Connect 2018, Microsoft Teams is a digital environment where everyone can work together, tapping into the Microsoft Graph – a digital brain that connects to buillions of data signals of every email and message in Office 365 to offer proactive insights – to give you intelligent communications.

He started by showing how he can check all of his information at home, and the switch it over to his desktop when he gets to work. Marc is in five separate teams, each with a number of channels broken down by department.

Third party applications such as Trello have been built into Teams and fully integrated. You post a topic in Teams that you want comments on, you can attach documents, and anyone can open it in Teams. You can flag people’s names to make sure they see it, and if people reply in a different language you can instantly translate for global communication. Onstage, Marc translates French and Japanese comments into English.

Marc then asks Teams, “Who knows about drones?” The software taps into the Microsoft Graph to analyze all of the communications within the company or group in order to offer the most relevant colleague to reach out to.

Broadcast meetings are coming in the next quarter, along with anonymous join – a way to pull in a contact that doesn’t have Microsoft Teams into a meeting. Microsoft is investing heavily in companion device experiences, so you can join the meeting using your laptop and your phone. You can control the presentation using your phone as a remote. You can access your camera and share content around you, like something written on a whiteboard.

With Microsoft Teams you can instantly schedule a meeting directly from a channel. Everyone that’s part of the channel will be notified, and people outside the channel can be invited as well. A new feature for privacy allows you to blur everything on camera but your face out of frame – so no need to leave the office with proprietary information on the walls behind you. You can share content directly into the meeting.

Call recording is coming next quarter and will capture the entire event, including speech and content. Everything will be transcribed in recorded meetings and you can turn on closed captioning or search to find out when someone talked about a particular phrase or subject.

Microsoft Teams and Other Devices

Finally, Ilya Bukshteyn, Partner Group Product Manager for Microsoft Teams Devices, takes the stage. He discusses how Microsoft is bringing Teams to every device you need in your workday.

Announced the week of Enterprise Connect 2018, IP desk phones will allow the full native Teams experience. Bringing Cortana into the IP phone, you’ll have all the same skills that are available on PC on the screen of your IP phone. Using Cortana you can just ask to call certain people.

For mobile workers, Microsoft announced a new category of devices called mobile phone stations. The one they previewed onstage comes from Plantronics. You just put your mobile device on the station, and it will charge wirelessly, and automatically transfer your calls or meetings to the stations speaker of headphones. A Teams button allows you to get right into the Teams experience.

Then there are room system devices. Microsoft partnered with BlueJeans, Pexip, and Polycom for new cloud video interop solutions that allow legacy VTCs to join meetings. The company also announced that every Skype Room System will be getting a native Team experience in the next few months.

A new proximity detector allows you to pull a room system into Meetings. Teams will recognize that you’re close to a Skype Rooms system and prompt you to push a button to have the Room join in. Your laptop will join in content only mode.

You can also disconnect on your laptop and (announced at the show) have intelligent video from LogiTech Meetup and automatically frame the picture during videoconferencing. MeetUp will also be able to feed information back to Teams for analysis of meeting room utilization. Natural language interaction – hit your assistant button and tell Cortana who to add and the person will be added to the meeting automatically.

The Room System family is also expanding. Two new partnerships with Lenovo and HP were announced in addition to existing partnerships with LogiTech, Polycom, and Crestron. A new update to the Surface Hub allows you to natively join Teams meetings. So you have a device for every kind of space and room system to be a part of the Teams experience.