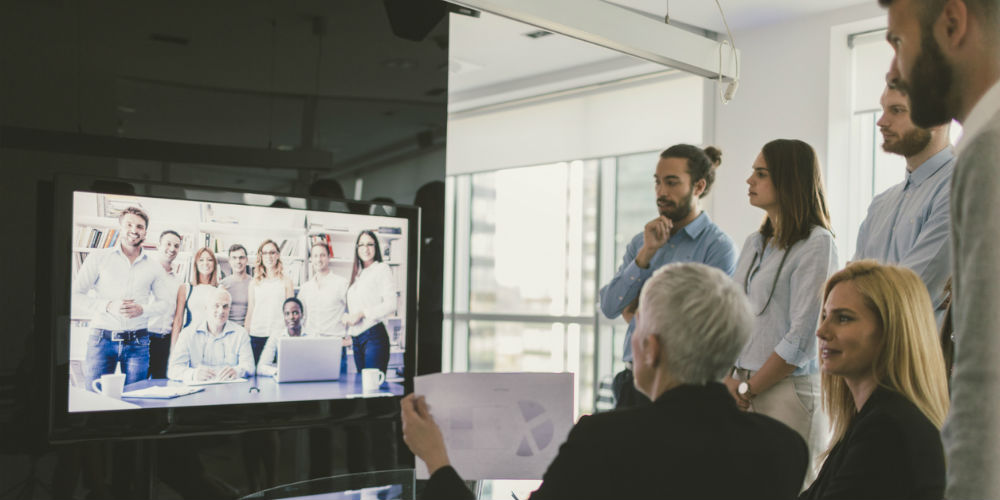 There’s nothing more effective than communicating face-to-face when doing business with colleagues and customers. In enterprises of yesteryear, employees typically resided in the same office building, so conducting meetings of this sort was no problem. But there were occasions when “patching in” remote participants to join a meeting, presentation, training session, or other events was necessary. Audioconferencing via landline telephone certainly helped bridge those geographical gaps … for a while.

But technology rarely stands still, and soon video merged with audio to add an exciting new dimension to business communications. Facial expressions and hand gestures joined the conversation, leveraged by the emergence of the video telephone. Rudimentary videophones captured still images which were transmitted over standard phone lines to the recipient’s videophone. Later, AT&T led the way with its Picturephone service of the 1970s, but it wasn’t until the computer revolution of the 80s that videoconferencing become a viable form of communication. The proliferation of computers in the workplace coupled with the rise of broadband and ISDN services transformed the communications landscape. Still, these early stabs at video conferencing were complex and expensive, discouraging many companies from adopting the technology.

At this time, broadband was pervasive and affordable, allowing enterprises of all types and sizes to implement some form of videoconferencing solution—mostly staged across desktops. This form of communication enabled employees to work remotely yet stay connected vis-à-vis to their colleagues and customers.

It didn’t take long for these companies to realize the financial rewards of videoconferencing: It reduced travel expenses, saved on real estate and other related office costs, and increased employee productivity. These same advantages still hold true today.

From the Desktop to the Conference Room

A study by Global Workplace Analytics shows that the average real estate savings with full-time telework is $10,000 per employee per year. This figure alone is enough to make enterprises seriously consider implementing videoconferencing systems—at the desktop level and beyond. Huddle rooms, conference rooms, and other meeting spaces have become part of the videoconferencing landscape. According to Aragon Research as many as 50 percent of conference rooms will be video-enabled by 2020.

Although videoconferencing of the early 2000s was recognized as a valuable communications tool, there was still room for improvement. Getting a videoconferencing system up and running in preparation for a meeting or presentation was a cumbersome, complex process and the results as far as audio and video quality were lackluster. “It used to take a dedicated person to set up the equipment and make sure it was going to work reliably and do things like bond ISDN lines together to ensure that there was enough bandwidth to support the videoconferencing session,” says Chris Hamilton, general manager of Sport View Technologies (SVT), Kalamazoo, Mich.

From Communications to Collaboration

Several advancements across the digital landscape would shift the videoconferencing paradigm from purely a communications tool to that of unified full-fledged collaboration system. “Today video conferencing is not only about seeing and hearing someone; it’s about being able to easily share documents,” Hamilton says. Auxiliary features such as file sharing, file transfer and electronic whiteboards have also joined videoconferencing platforms.

Largely responsible for this transformation are the Internet’s support of greater bandwidth and the availability of cloud-based videoconferencing services. “Cloud-based videoconferencing and collaboration is the new norm,” Hamilton continues. It minimizes the expense and setup of on-premise hardware, and according to Hamilton, opens the door increased interoperability between systems. “Google users will be able to instantly conduct a videoconference with Zoom or BlueJeans users; not just with other Google users.”

As for bandwidth, new compression standards are allowing higher resolution video to travel over the Internet. This has enabled videoconferencing displays to present meetings in 4K; small, inconspicuous 360-degree cameras can capture and distribute video in high-def, and new features and functionality to begin to emerge. Cameras can track conference-room speakers and zoom in automatically, intelligent microphones with built-in Dolby provide clearer, more lifelike audio, and displays with 3D capabilities will render a more realistic view of objects, people and office locations.

Additionally, as IoT continues to become more pervasive, videoconferencing devices and systems will be able to communicate seamlessly with occupancy sensors, lighting, thermostats, motorized shading and more. Imagine walking into a conference room and having the lights, window shades and videoconferencing and collaboration system set up automatically for a meeting. It’s doable, thanks to continual advancements in videoconferencing solutions. From basic face-to-face interaction to complete collaboration and control, videoconferencing has become a mainstay in today’s modern office space, giving managers, administrators and employees an effective way to stay connected.