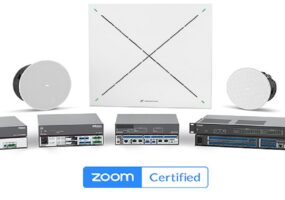 Anaheim, Calif.-based Extron announced that several of its audio processors, amplifiers and speakers are now certified for Zoom Rooms. The company has worked together with hardware solutions partners, such as Sennheiser, to develop solutions that deliver optimal user experience regardless of room type. According to Extron, the products in the Zoom Rooms Certified Design Solutions […]

The wildly popular HBO series Game of Thrones has come off the screen and onto a live immersive stage concert experience featuring 807 linear feet of jumbotrons, and 3D designs that rise from the stage floor. Pedro Eustache, the featured winds soloist channels GoT’s iconic Songs of Ice and Fire through 15 different instruments including […]

James Hoyer, Assistant Director of Instructional Technology at North East Independent School District (NEISD) Located in San Antonio, Texas, understands the success that happens when the connection between the teacher’s voice and the learner’s mind occurs. In order to improve the listening and learning environment for every child and strengthen the connection between teachers and […]

Why Becoming a Partner of Tech Providers Helps Schools

When I was the Principal of Columbus Park Elementary School in Worcester, MA, I often had companies try to convince me to buy their products. For the most part, I would say yes or no to what they offered, and that would be the end of it. Once, though, my colleagues and I went beyond […]

With the help of Soundworks Systems, Inc. and Powersoft Ottocanali and Duecanali Amplfiers, spectators can enjoy clear and powerful audio at K.B. Willet Ice Arena.

How This Audio System Complements Meals at LA Restaurant

At Otium in the Los Angeles cultural corridor, the audio system is as important as the dining room aesthetics.