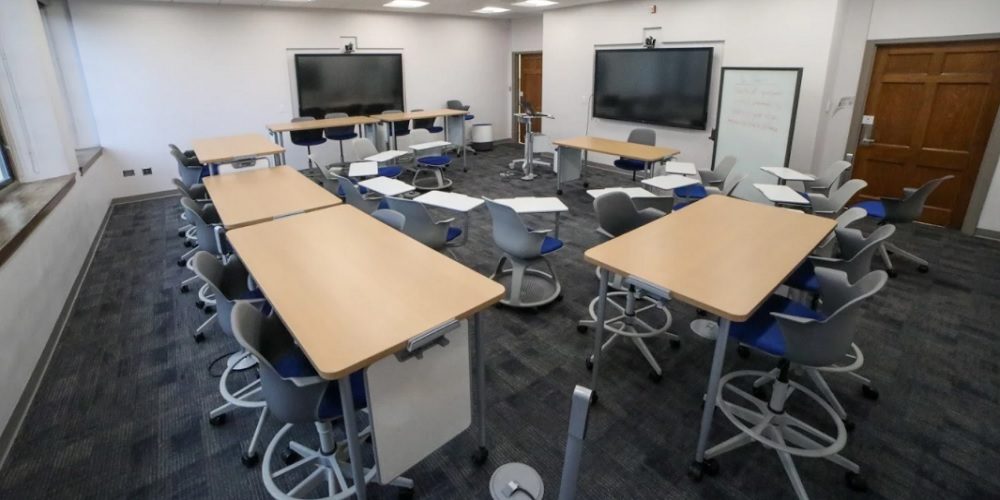 Georgetown University, in Washington, D.C., was founded in 1789 and is the oldest Jesuit Catholic institution of higher education in the United States. It is also among the most forward-thinking universities when it comes to applying new technology to learning. Twenty years ago, Georgetown launched its Center for New Designs in Learning and Scholarship (CNDLS), one of the nation’s first higher education programs aimed at bridging pedagogy and technological innovation.

“Georgetown has a long tradition of Ignation pedagogy, based on the 16th-century teachings of Saint Ignatius of Loyola,” says Margaret Debelius, Director of Faculty Initiatives at CNDLS.

“It’s this five-step process of context, experience, action, reflection and evaluation. It still stands to this day, and technology allows us to do those things a little bit differently.”

“From a professor’s perspective, Georgetown wanted to have a dual-display setup that could support remote participants on one screen and presentation material on the other. They also wanted a more typical single-display system you might see in a standard classroom. And they wanted to make it so smaller groups of students could gather around several different displays, connect and collaborate.”

The final design, which first welcomed students and teachers in the fall of 2019, includes a pair of large (75-inch), 4K, interactive LG touch displays at one end of the room, a third 86-inch LG interactive 4K display at the other, and a fourth 86-inch LG 4K display on one side, opposite the classroom’s bank of windows.

There are Logitech cameras installed on each wall for connecting directly to Georgetown’s Zoom video conferencing system; Biamp ceiling speakers and microphone arrays for tracking speakers in the room and optimizing audio on other ends of a Zoom session; and four Mersive Solstice collaboration pods, which users can connect to wirelessly to share content on the room’s displays.

“Many Georgetown remote classrooms have a big stage, a mothership of a desk and a screen that’s very clearly at the front of the room,” says CNDLS Managing Director Molly Chehak.

“We took out the stage and the desk so there is no front of the classroom. All the displays can be used by anybody in the room — instructors and students alike. They offer a collaborative space where students can work together on the same screen or multiple screens at one time, comparing, contrasting and collaborating. In a lecture-style situation, a professor can use one or more as a confidence display, or set them up as a gallery walk.”

One anthropology professor would start each class in a unified, centralized formation, then students would rearrange the mobile furniture to be physically near one of the room’s four displays. “They’d collaborate on a screen, then turn around and present to the rest of the class,” Chehak says.

For Georgetown, it’s a real-world application of new technology to an active-learning pedagogy. “The professor’s presentation is about five or 10 minutes at the beginning of class,” Chehak says. “The rest of the class is experiential; it’s discovery and inquiry-based learning.”

Everything in the room is managed through a Crestron control system and touch panel, specially programmed to be as seamless as possible. According to CTSI, the biggest challenge may have been designing the system to include remote participants who would appear on the LG displays via video conferencing link.

“If you’re familiar with most control systems, you basically need to leave that software to launch a Zoom session. That’s not practical for the people using the room,” says Bukowski.

“We worked with Crestron and Zoom to modify the application programming interface and create intuitive buttons, so it felt seamless as the professor transitioned to conferences.”

And with four different large-screen touch displays but only one classroom computer, the control system needed to manage which touch display was controlling the computer and when.

“We tried to make this transparent, too,” says Bukowski. “On a graphical map showing the room’s displays, a little thumb icon indicates which touch screen is in control.”

When professors initiate a videoconference, they go to the touch panel, select Zoom, tell the system where they want the remote participants displayed and where they want the presentation displayed, pick the screen with the thumb and then they’re actually controlling it through the LG touchscreen display.

“Typically, a higher education learning space might have one of these configurations in a room,” says Bukowksi. “But we worked with the CNDLS team and our partners to make hopping in and out of different collaboration modes very intuitive.”

Faculty has been quick to adopt the remote classroom technology. When the CTSI and LG teams visited to familiarize users with the installed systems, the wireless Mersive collaboration pods, for example, were well received by faculty and students alike.

Because users can connect to the pods from their smartphones and begin sharing content on the room’s LG displays, the learning curve was very minor.

“I got to my third sentence and I could see them popping up content on the screens all around the room,” Bukowski says. “No one wants to lug around a laptop anymore. They’re going around with a smartphone or a tablet that’s frankly more powerful, but until recently, people didn’t really know how to put all that power to use.”

Says Chehak, “The changes we made to the remote classroom reflect the deep shift in pedagogy and the experience of education. It’s student-centered, collaboration-centered, it’s multifaceted and needs to allow for the outside to come inside, and the inside to go outside. Technology can do that.”