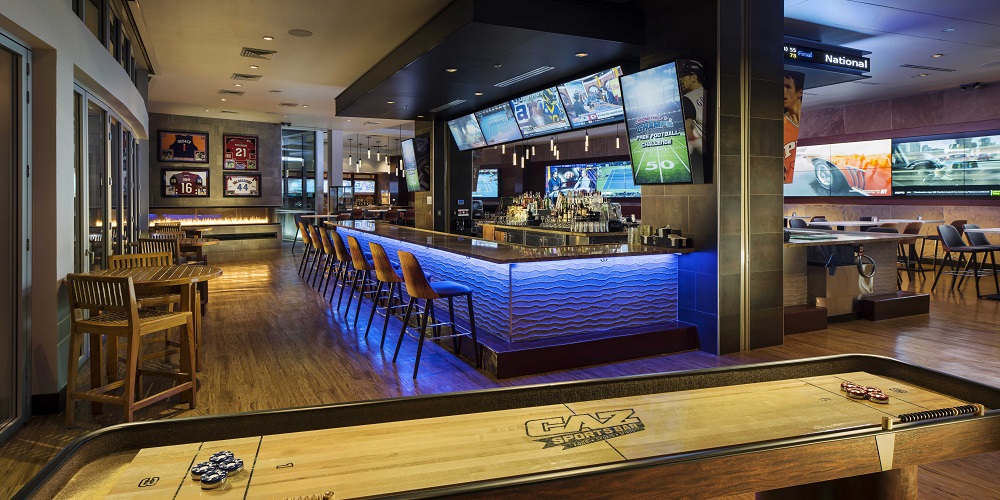 Casino Arizona is located on the Salt-River Pima Maricopa Indian Reservation in Scottsdale, Arizona. It covers 20 acres with a facility that includes five restaurants, more than 100,000 square feet for gaming, a large concert Showroom and a Bingo Hall that offers seating for 1,000. Plus, it now has a new means to drive business, thanks to a project by CCS Presentation Systems.

Casino Arizona took an existing bar/restaurant that wasn’t driving business the way they wanted and redesigned it to become CAZ Sports Bar, a destination for sports enthusiasts to catch a game.

Casino Arizona is a long-term client of CCS Presentation Systems. When they decided to update their existing restaurant, they immediately contacted CCS to work with them on the design of the new CAZ Sports Bar.

More than 1,000 speakers and 100 displays are installed, highlighted by a continuous video wall of fifteen 103-inch plasma displays on a custom designed lift system.

The system sits on the CAZ production network, requiring a great deal of interface with the CAZ IT staff to set up their network to accommodate the 40GB of bandwidth required.

CCS was able to take a loop out of the SVSI encoders and take that into the Magenta system for the remainder of the property. This entire update was done without taking down the existing video system in this 24/7 facility. 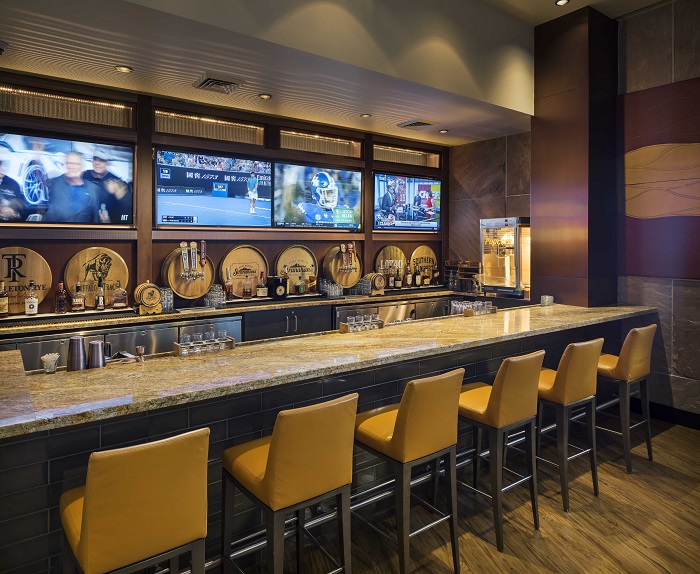 The existing video distribution system throughout all venues is an old analog Magenta system.

The CAZ Sports Bar project allowed an upgrade of the backbone to a digital IPTV system, while keeping the Magenta system online for the remainder of the property.

The display system included two 6×2 and two 8×2 NEC UN551S Video Walls. These are split into 2x2s for signal. It has ten 55-inch NEC monitors above the main bar and another 4 at the back bar.

There are two Sunbrite outdoor TVs on the patio. A feature of the bar is two13K Lumen 4K Barco projectors, edge blended together with a Corio processor to allow for windowing of multiple TV feeds.

Above the main bar is a Rise ticker that scrolls live sports updates including news and scores from an RSS feed.

Audio is a distributed system in the main bar, with a surround system around the Barco projectors for an immersive experience. All equipment is QSC and Sonance.

The video wall displays were installed on a concave wall. The shallow strut had to curve with the wall and the displays had to be installed to maintain an acceptable image on each 2×2 video wall.

The video walls were mounted on an existing rock wall 1-1/2” thick, decorative wall covering ¼” thick with a ½” airgap and ½” drywall.

A Corio video processor was used to manage the video feeds on the dual projector wall. Corio and Barco worked in conjunction to have both products commissioned simultaneously. Because of the size of the projection screen, Barco’s edge blending was very time consuming and precise.

The custom Draper screen was quite large, weighing approximately 600lbs and measuring 24’ wide. There was no entry way to allow the crate to be dollied into the grill area.

Read Next: This Interactive Tech Environment at Re:Match Gaming Center is a Marvel in Decision-Making 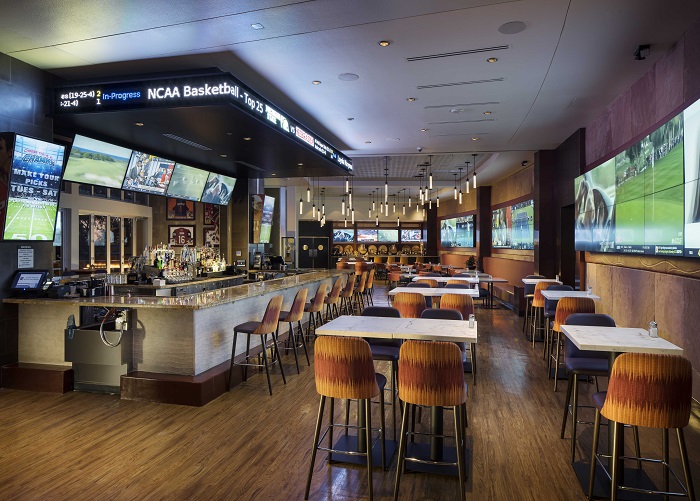 The screen had to be un-crated, handles were mounted on 5 points of the screen case, 10 people had to carry the screen and lift it over a glass wall into the grill area.

Because of the weight, the screen could not be lifted into the niche.

Electric winches were mounted above the niche and the screen was flown into the niche.

Permanent structural support was put in place and the winches were sacrificed in the ceiling. The screen niche left 1/16” of clearance on either side of the screen case.

CAZ has had the pleasure of working with CCS Presentation Systems for the last ten years on everything from small boardroom projects all the way up to enterprise level IP based audio and video systems for our resort and casinos.

The service and professionalism we receive has been critical for the success of these projects and I look forward to continuing our relationship.