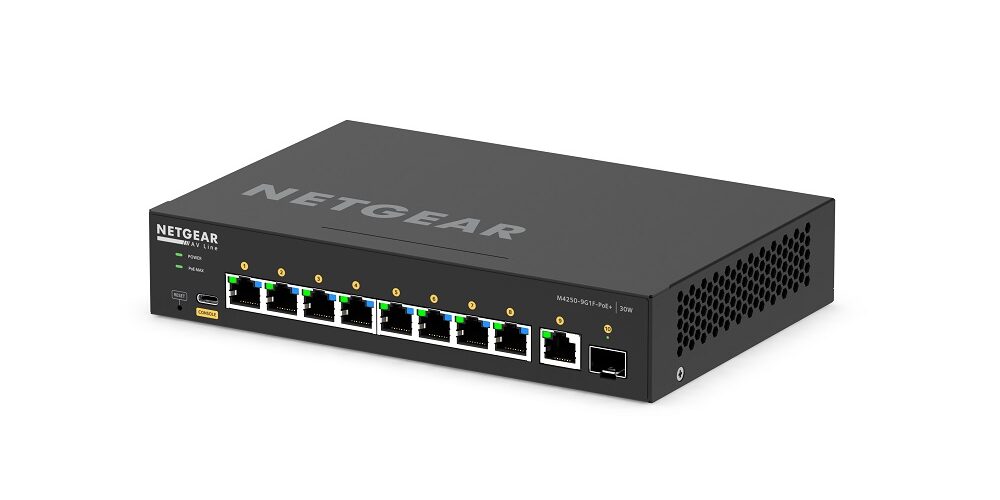 NETGEAR, a provider of networking products that power businesses of all sizes, announced three new AV-over-IP products to be shown at the annual National Association of Broadcasters (NAB) trade show April 24-27 in Las Vegas. The introductions include the NETGEAR Engage Controller application, which builds on the AV graphical user interface (GUI) found in the M4250 series managed switches and two new, smaller M4250 desktop switches to allow for streamlined installation in a range of space-limiting applications.

Together, the products strengthen NETGEAR’s commitment to the AV-over-IP market, which exploded over the last year as high quality, low latency video and audio distribution over an IP network has helped to increase scalability and innovation throughout the Pro AV industry, according to NETGEAR.

The NETGEAR M4250 AV Line Series switches remove all the complex menus filled with arcane IT network jargon, the AV GUI provides a simple AV friendly template-based approach to switch configurations. This streamlined workflow enables installers to dive right into projects with the confidence that all the network settings are correct for their application, eliminates the steep learning curve and cumbersome setup normally associated with network switch configurations, according to the company.

The NETGEAR Engage Controller application extends this simple-to-use approach providing the same level of efficiency with comprehensive configuration of any M4250 or M4300 managed switches. With only a few clicks, users can configure these robust switches for any AV-over-IP installation ranging from digital signage and wayfinding to entertainment venues, corporate conference rooms and lobbies, education, houses of worship and more.

Available next month, this new standalone software solution will be a free Windows, Mac, and Linux application users can use to set up and monitor NETGEAR’s powerful switches engineered for AV-over-IP.

Joining the NETGEAR Engage Controller are two new additions to the M4250 portfolio – compact, desktop M4250 models. Since its launch, the M4250 AV Line of managed switches has redefined Pro AV industry benchmarks, due to the AV-oriented design, unique AV GUI, and the same out-of-the-box functionality found on the popular M4300 and M4500 switches.

From conference rooms to digital signage, the new M4250 desktop models are small enough to fit behind a monitor or under a conference room table allowing full functionality in a compact form factor with the horsepower needed for complicated installations.

“NETGEAR has continued to recognize the evolution taking place in the Pro AV world and specifically the advancements in AV-over-IP installations that are changing what is possible in our industry,” says Laurent Masia, director of product line management for managed switches at NETGEAR.

“The latest example of our commitment to this space is a pairing of these new products that further elevate our managed switch product line and deploy an entirely new way of switch configuration solely designed with the AV Pro in mind,” Masia says.

Phase 1 of the new NETGEAR Engage Controller will be available in Q3 for download free of charge at NETGEAR.com/engage.

The M4250 Desktop Models will also be available in Q3 from major Pro AV distributors.