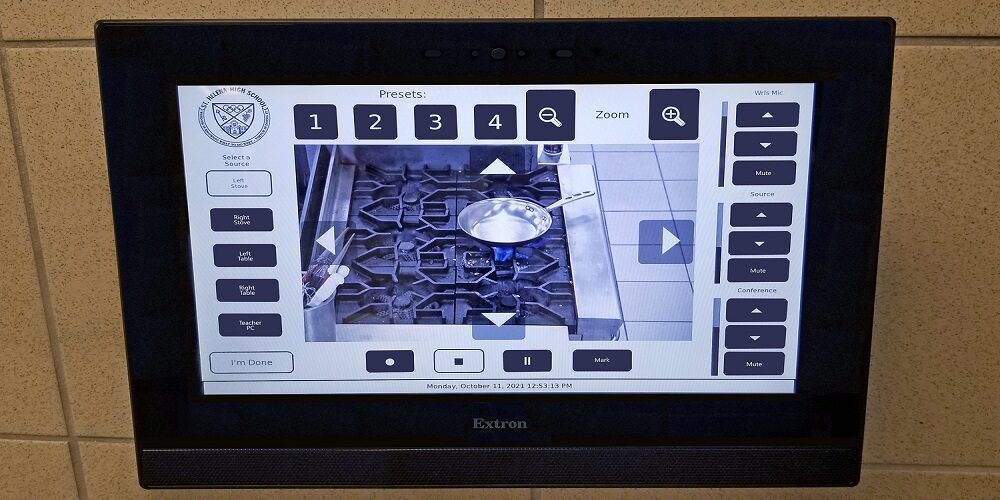 The institute stated that it wanted to enhance instruction and enable students attending from home to have an equal and seamless experience in the culinary classrooms.

Thus, it brought in E.R.I.C. Low Voltage Services (LVS) to design and program the installation. It also employed Consolidated Networks Corp. (CNC) to integrate the NAV Pro AVoIP system and the processor from the AV manufacturer.

Installing the New System to the Classroom

The culinary classroom includes six full commercial kitchens. Previously, the students gathered around the outside of the kitchen to watch the chef prepare and plate the dishes. However, visibility became an issue.

With that in mind, a rudimentary AV system was set up. The video was sourced from a GoPro camera that the chef wore around his neck or on his toque hat. While this improved visibility, the camera was cumbersome and the single point of view had limited value.

Later, a closed-circuit TV system was installed, with RG 59 to BNC connectors going from PTZ cameras directly to receivers installed behind the 55-inch wall-mounted displays. The next step was a network solution with streaming capabilities.

This is where the Extron NAV Pro AVoIP system came into the picture. According to the company, it ties three broadcast-quality 4K HDMI PTZ cameras to the existing displays as well as provides content to the streaming system. Additionally, an Extron NAV E 101 encoder was mounted with each camera. The encoder helps share video from the chef’s grill/range station and the two food preparation stations.

The cameras are placed on either side of the grill vent hood while the third is above the gas range. The chef’s PC is installed on a shelf beneath one of the prep tables. It is connected to an Extron NAV E 201 D wallplate HDMI encoder. The five transmitters stream AV signals over the 1 Gbps Ethernet network.

An Extron NAV SD 101 scaling decoder mounted behind each display scales the video to the device’s native resolution. The decoder includes the PURE3 codec, which leverages periods of low motion to stream high quality video at efficient bitrates. A serial control port on the NAV decoder passes control signals from the Extron control processor to the display. The NAV encoders and decoders are powered over Ethernet alongside the AV signals. Use of PoE+ streamlined installation and freed outlets for the many kitchen appliances. 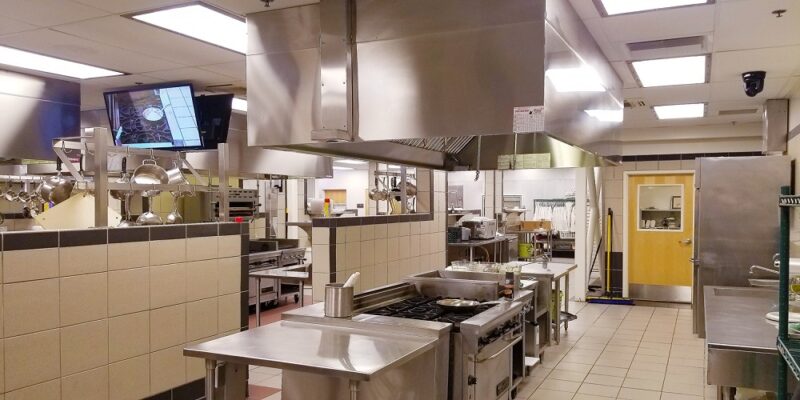 Setting up the Control Panel

To control the AV system, the chef uses an Extron TLP Pro 1225TG 12-inch Tabletop TouchLink Pro Touchpanel installed next to the PC. Its quad-core processor ensures quick page loads. This allows the system to keep up with the chef. Installed under the prep table, the panel is within reach of the chef. Furthermore, it is protected from splashes and direct heat.

The touchpanel is paired with the Extron IPCP Pro 255 IP Link Pro control processor, which includes the LinkLicense for User Interfaces upgrade. The control processor automatically distributes IP addresses and network configuration parameters for the PC, camera system, and other AV sources connected over the school network. LinkLicense provides a means for the control GUI to be run on wireless devices.

The system also includes a NAVigator System Manager. This helps the NAV system operate as a flexible network matrix switching solution. NAVigator is integrated directly with the control processor. The integration isolates the signals from the rest of the school’s network traffic. This ensures high performance system operation without interference or switching delays.

The system components are rack-mounted in an equipment room located down the hall.

Audio is picked up by the Shure BLX wireless microphone system and the lavalier worn by the chef. It is designed by zone. For instance, the chef’s kitchen and each student kitchen is a separate zone. Signals are then fed into an Extron DMP 64 Plus C V AT 6×4 digital audio matrix processor that includes AEC, VOIP, and Dante.

Within the classroom, an Extron NetPA U 1004 power amplifier with Dante and DSP 100 watts per channel drives a 70 V distributed audio system. Consisting of twelve Extron SF26CT SoundField ceiling speakers, the system provides clear audio throughout the classroom. It also allows students to hear over the clatter of pots, pans, and chopping blades. Being convection cooled, it can also withstand the fluctuating temperatures. Like the DMP64 Plus processor, the audio amplifier receives signals from the network switch over Dante.

Three years ago, CNC upgraded the school to a CAT 6 cable infrastructure that provided a 40 Gbps backbone with at least a 10 Gbps uplink between the switches.

Currently, the system maintains 40 Gbps with up to 100 Gbps in some spots of the switching architecture. This gave the school the bandwidth needed to support streaming.

The Extron SMP 111 streaming media processor captures and distributes the camera feeds and other resources for selectable live streaming. The content can be streamed to offices, classrooms as well as the remote students. The SMP 111 also provides simultaneous recording of the HDMI video and audio. These recordings include extensive metadata. Some of the metadata includes date and time stamps, chef’s name, recipe title, and cooking techniques.

From concept to commissioning, the entire project was completed in two weeks.

CNC credits this in part to Extron’s products and the support engineers. The administration expressed its pleasure on the success of the Extron NAV Pro AVoIP system upgrade in the culinary classroom.

At the chef’s request, a fourth PTZ camera is now being mounted to the front of the vent hood. This will allow each student to see a hands-on view of the chef at work. According to the programmer, adding to a NAV system using GC Pro only requires very little time.

“In my experience of programming products from a wide variety of AV manufacturers, NAV is by far the easiest system to configure and program, and Extron support is top notch,” says Eric Marshall of E.R.I.C. LVS.

Brian Baesler, program manager at CNC, concludes, “[The] integration of Extron’s NAV Pro AV over IP system and the SMP 111 streaming processor lets the students at home be on the same page as those in the classroom, making this AV system just what the chef ordered.”