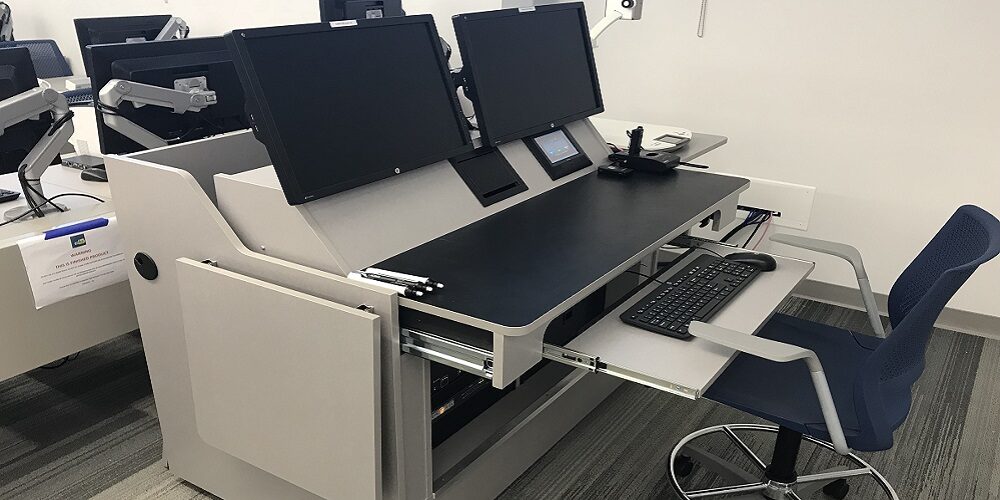 Marshall Furniture, the Illinois-based manufacturer of custom presentation technology furniture, prides itself on being able to meet any customers’ needs, providing quality craftmanship and quick service to help its customers transform rooms into technology-enabled spaces.

That is exactly what the company has done for several years for the technologists and educational staff at Mt. San Antonio College, a community college in Walnut, Calif. that spans 420 acres and serves over 60,000 students.

To meet the needs of that large student population, the school’s manager of technical services engineering, Chris Rodriguez, was tasked in 2014 with finding a furniture vendor that could meet some of the campus’ challenges as it planned for new buildings and learning spaces, including a new 60-classroom building.

Chief among the college’s concerns was compliance with ADA standards to allow instructors with wheelchairs to be able to use lecterns effectively. The school’s current lectern was prohibitively large, making it difficult for technologists to work with and for people with disabilities to use.

When Rodriguez saw a demonstration at InfoComm 2014 of how Marshall Furniture’s custom lectern incorporated their unique lift-and-extend wheelchair-accessible package, which consists of an electric height adjustment and an extended surface for ADA wheelchair accessibility, it “completely blew (his mind.”

“I still show people that idea and they’re blown away by it,” Rodriguez says, adding that the lift-and-extend design allowed for the footprint of the lectern to be much smaller, which is a lifesaver for interior designers and people with disabilities alike.

Even more customizability from Marshall Furniture

After that meeting at InfoComm, Marshall Furniture and Mt. San Antonio College iterated on several different designs that started with ADA computability and went back and forth on designs for about a year until they settled on a 48-inch lectern, otherwise known as model ELCO-48WS-SACADA. That process included roof-of-concept designs of both the 48-inch lectern with a dual rack and a smaller 34-inch single rack solution.

For Rodriguez, Marshall Furniture’s custom design solutions featuring the ELCO-48WS-SACADA wheelchair-accessible package checked all the boxes: the furniture came with the college’s branding, had a sleek design, was ADA compliant, reduced the size of the college’s lectern by twelve inches, and fit all the necessary equipment.

However, the expert furniture makers went a few steps further, tackling some of the college’s technology pain points, such as messy cabling that frustrated professors and students alike. After conversations with different departments and technology staff, that issue emerged as a top priority, Rodriguez says.

Essentially, the college wanted the ability to retract cables into the lectern, so cables were more accessible and didn’t require adapters and additional equipment when plugging in a laptop or other device.

Although smaller, the lectern still provides more than enough space for a myriad of technology requirements. The product includes not only drop leaves on each side to save space when necessary, but also includes a document camera and laptop space when needed. 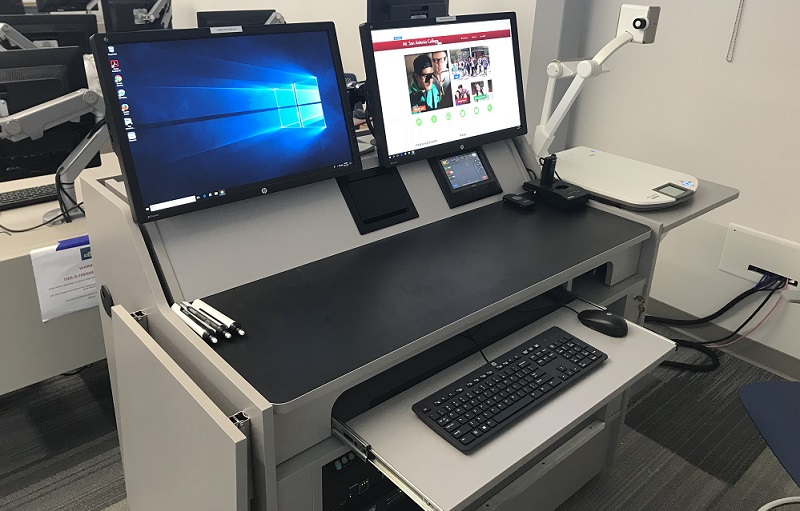 Based on previous projects, Marshall Furniture and the college opted to not include doors on the backs of the lecterns facing the instructor, as these made servicing the equipment and accessing components difficult. That opened the door for yet another example of the company’s ability to meet any need.

After a few years of using those lecterns, Rodriguez noticed that professors tend to want to rest their foot on something while standing behind the height-adjustable lectern, so Marshall Furniture began incorporating an angle iron aluminum kick rail of sorts that helped reinforce the edge and the floor of the cabinet.

Staying true to the company’s identity as a highly customized maker of furniture, Marshall Furniture flush mounted the aluminum to the lectern.

There have been several similar small additions made to the furniture being used among the college’s 700 classrooms, which is a testament to the company’s ability to meet any needs, even after the solutions are already built, shipped and in use.

“Sometimes those tiny little touches make an installer’s job so much easier, and for users, these little additions make all the difference in the world,” says Michelle Wille, managing partner at Marshall Furniture.

The relationship between Marshall Furniture and Mt. San Antonio College has grown to include several other iterations of teaching lecterns, including a 60-inch and 72-inch workstations that enables height adjustments with ADA wheelchair accessibility, two models taken from their RISE Series, which are perfect pieces for professors that need a larger work surface.

A critical need for Rodriguez when selecting lecterns was the ability for the AV rack to travel with the height-adjusted table as it is lifted and dropped. The solution was to integrate the rack to the table so that it goes up and down with the table—a feature that was virtually nonexistent in any off-the-rack solutions the college tried before.

Now, depending on instructional and space needs, the two pieces of furniture are the standard teaching lecterns on campus, according to Rodriguez.

“We were able to work together to develop two options based on the need—whether it’s for function or cost,” Rodriguez says.

A key part of Marshall Furniture’s identity is their ability to design furniture that makes installing and servicing technology easy for contractors or in-house AV/IT staff. That was exemplified by the creation of a removable mount box which provided space for a touch panel in the ELCO-48WS-SACADA between where the retractors are mounted. However, it also had to be installer friendly.

The lectern was built at Marshall’s facility and shipped to the college, but the AV contractor needed the ability to install the components. Working together, the entities found a way to make the mount box easily removable to build technology within.

“It’s quite a piece of engineering,” Rodriguez says.

That equipment in the ELCO-48WS-SACADA includes the Extron Cable Cubby 700 in the sliding top that houses Extron cable retractors supporting HDMI, network, display port, and audio. The box is also large enough to include adapters on the HDMI cable. Also included is power and USB for laptops, according to Rodriguez. 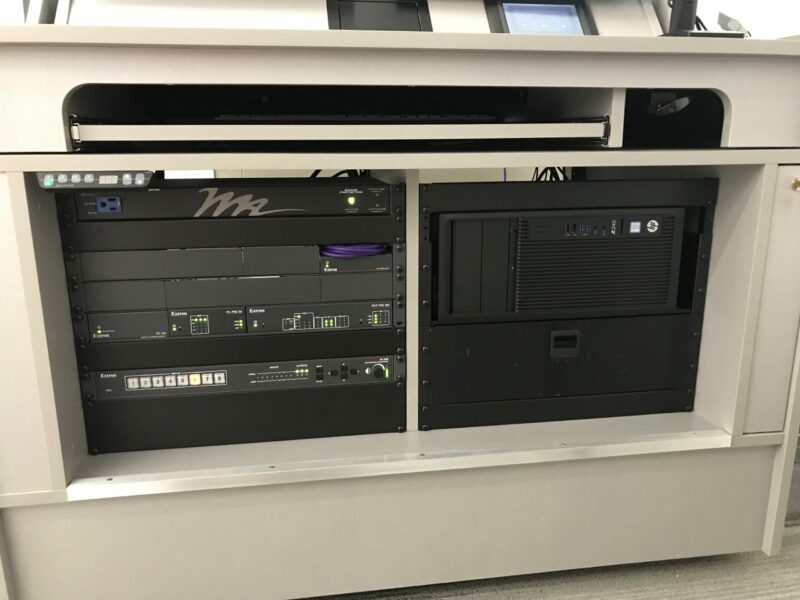 For the larger 60-inch and 72-inch table designs, the college uses the Extron Cable Cubby 1202 with pass-through cable for laptops and network, as well as connections for power and USB.

According to Wille, the company’s attention to small details helped make a product with options that allow installers to disassemble the furniture without any issue upon reconstruction. That work included special harnesses to support the cable retractors being held in place to keep everything stationary when it’s put back together.

“The lectern ships, they get it, and installers just unscrew the mount box, take it off and then load it,” Wille says. “There’s a lot of technology going into this piece, so we had to design it for ease of installation.”

With concerns about rack space, messy cabling and size immediately solved, Rodriguez and his team now have more time to work on other issues, such as screen placement and other technology needs.
“It’s made our ability to turn around projects much quicker and more definable,” Rodriguez says.

In addition to securing the racks behind service panels with a special keyless entry to prevent non-tech staff from attempting to solve issues on their own and making matters worse, the retractable cable function has helped the college’s AV and IT staff reduce damaged cables because of doors closing on them.

The lecterns also function as flexible teaching solutions that are capable of housing either just enough technology for the professor to operate the room, or a more robust stack that can support videoconferencing, annotation, microphones, screens and more.

“We can put in a very minimal amount of technology to make the room work and still use the ADA-compliant teaching station, or we can load that thing up,” Rodriguez says. “Flexibility was key.”

Yet another plus for Rodriguez in working with Marshall Furniture was the built-in ventilation and other small details that made it clear the company provides technology-enabled furniture. Other vendors that claim to offer “technical furniture” simply take a piece of ordinary furniture and shoehorn a rack into it. Others also don’t consider cable routing or protection inside the system.

“That was very reassuring to see early in the design,” says Rodriguez “It’s really refreshing to not have to worry about Marshall Furniture.”