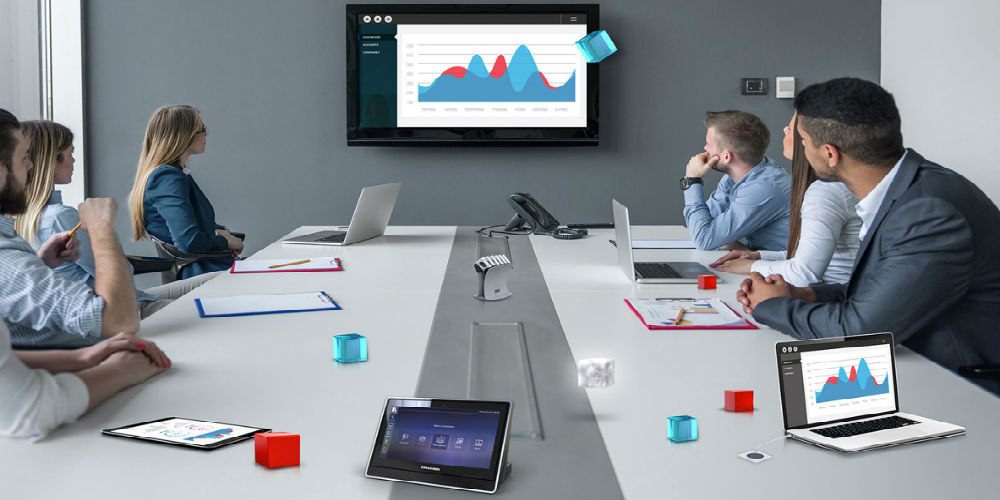 Kramer typically sets up its booth at InfoComm around a certain theme, such as connectivity at last year’s show in Las Vegas. This year in Orlando, for InfoComm 2019, Kramer wants to show visitors their vision of the future of the AV industry.

“We see the Pro AV industry going toward being a software-based industry,” says Clint Hoffman, CEO of Kramer.

Kramer backs that up with the products that the company is showing at InfoComm 2019 in Orlando. VIA wireless presentation and collaboration products, while inside a box, is fundamentally a software. VIA software can live outside the box.

Kramer Control is a cloud-based software solution – migrating all setup logic to the cloud and leaving Kramer Control “brains” on the premises.

“Everything could eventually be one piece of software,” says Hoffman, “And then it becomes which platform do you want. That’s where we’re headed. When technology goes in that direction, whoever has the best interface wins.”

We’re not there yet – Kramer sells VIA on its own, Kramer Control on its own, encoders and decoders on their own. What Kramer can do is provide platforms. “We’re moving to that future by taking individual solutions that we have now and making them more multi-function,” says Hoffman.

Take VIA for example – all VIA products have digital signage built into them. When not using the device, it can be a digital signage player that displays messages when and how the user wants, running them constantly. Kramer Control software can be placed into VIA on top of that. The VIA can also be a decoder, so when you have an AV-over-IP solution the VIA can decode them.

“This multifunctional, platform direction is a step toward the all-software future, which we’ll be showing and talking about most at the show,” says Hoffman.

The Fear of Platforms

“I want to circle back to the word platforms because, frankly speaking, in the Pro AV industry sometimes that term means to an integrator that you have to have a complete company solution,” says Hoffman.

Hoffman believes that saying platform is as if you’re saying you have to sell Kramer at every step of the way or you’re not going to have a successful system. Integrators don’t like that. They’re in the business of providing the best solution, and if that involves putting in multiple products, that’s what they do. Somehow this word platform has become synonymous with “use all one manufacturers’ product.”

“We don’t mean that when we say it,” says Hoffman. “We mean multi-function capable solutions that solve a bunch of problems in one piece.”

In that regard, Kramer is releasing Kramer @ Work packages that will offer complete meeting room solutions that are IT friendly and easy to support. The packages include seven tiers for meeting spaces of different sizes:

. Each package consists of a suite of products that make the most out of spaces of each corresponding size. “Rather than having to sit around and figure it out, it’s already done for you,” says Hoffman. You can learn more about each package here.

You can find out more about Kramer’s vision of the future by heading to the company’s booth at InfoComm 2019, booth 2929.