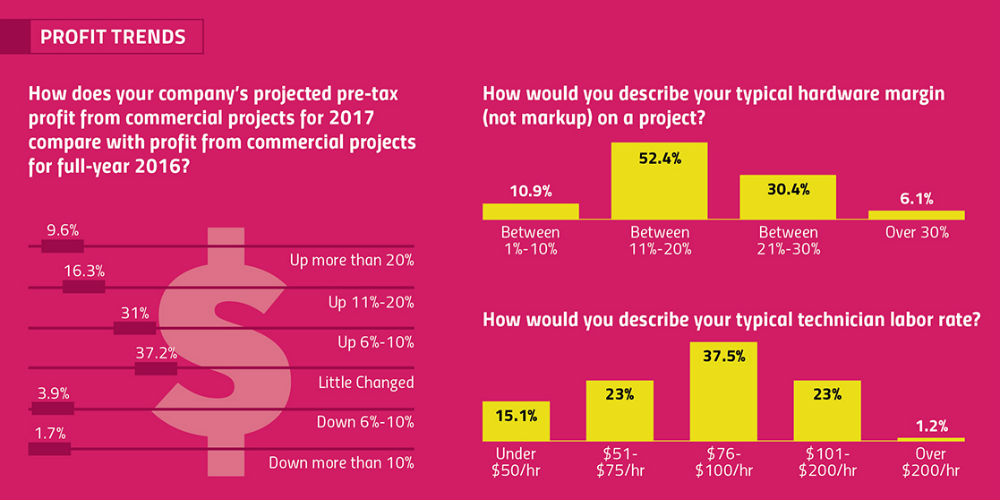 The relationship between hardware margins and AV labor rates in the pro AV industry continues to leave some dismayed. Project profitability seems to be up overall, but like a dubious contract, there are some “hidden costs” to the advancements.

“I think we are finally seeing better business practices being implemented across the channel.”

Less of the AV Industry is Struggling to Increase Project Profitability

It’s also good that hardware margins are climbing, sort of.

Many in the AV industry look to offset margin profits by simply charging more for service. But as we’ve said before: that, is an over-simplified and ineffective solution.

Wilson suggests there are way too many — at 76 percent of respondents — charging less than $100 labor rate.

Project backlog is up year-over-year and that’s a very good thing.

NSCA finds a lot of value in analyzing backlog, says Wilson. He calls it the “best predictability tool for labor requirement.”

It makes sense, therefore, that the industry is hiring according to the Integration Business Outlook survey, which shows that the average firm is currently looking to hire seven employees.

One thing about backlog, however, is that integration firms should strive for diversity of product categories.