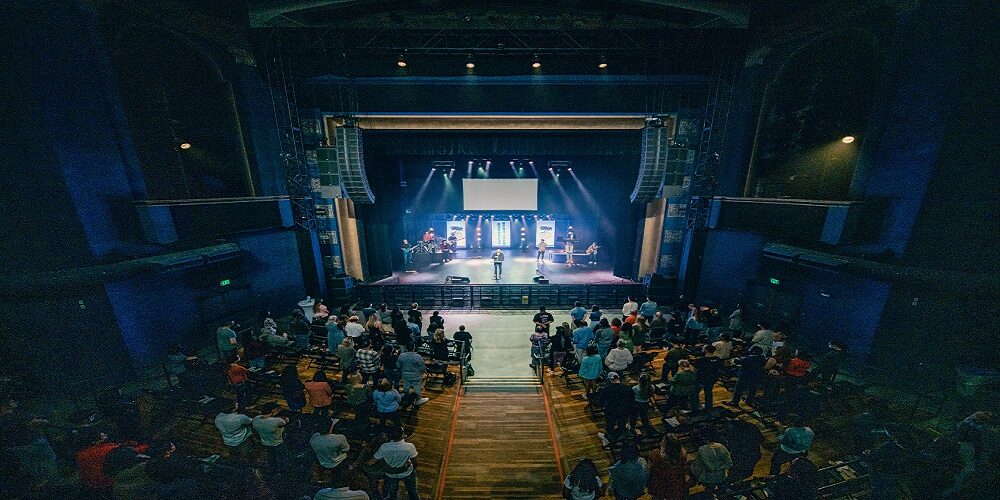 Vox Church is a multi-site, non-denominational church that puts a lot of emphasis on music performances and communication from the stage. Its campuses cover much of New England’s central and southern tiers, from Stanford, Conn., to Worcester, Mass.. However, it operates eight locations (with a ninth expected to open shortly) in a region crowded with television broadcast stations. The region is also heavily populated with event sites that use wireless mic and in-ear monitor systems. Understandably, this made for a challenging RF environment.

Vox Church’s A1 audio engineer, Eugene “Geno” Mulcahy, faced this situation when he came aboard several years ago. He came to help the church deal with its proliferating number of wireless channels. According to the church, the channels are used for both vocals and speech, and for in-ear monitoring.

Mulcahy came to Vox Church after a decade at Mohegan Sun Casino. Mulcahy recalls the challenge of building and managing the resort’s infrastructure. He notes particularly the installation of wireless microphones in every aspect of the property. “But it really taught me the importance of establishing a good RF infrastructure for wireless,” he says.

At Mohegan, he met RF Venue’s co-founder, Chris Regan. At the time, the new brand was first getting its RF product line off the ground. This encounter became a foundational part of that infrastructure. “Chris really showed me how critical the antenna and its distribution is to a reliable wireless system,” he says.

Mulcahy says he brought those lessons learned to Vox Church. He implemented its wireless systems using wireless antennas and signal combiners from RF Venue. “Antennas and distribution are the non-fun part of working with wireless. [But] they are mission-critical to making any event happen flawlessly,” he says.

Mulcahy states that the RF Venue products ensure that there are no dropouts. According to him, this is the one thing that absolutely has to happen with wireless. “If you lose audio during a service, especially during the streaming audio that’s going out to other campuses that depend on taking their music cues from us, it’s game over. It’s as bad as losing video.”

He further adds, “We do what is called point-to-point streaming. [Here,] we send various channels to our other church campuses so the band at remote locations can play along with the main worship band at our broadcast location.” Mulcahy states that, if the worship leader’s mic fails, it fails in the live performance area and at other locations.

The Vox Church antenna, distribution and combiner systems include the RF Venue Diversity Fin antenna. This is a multi-purpose antenna that can make an RF system less susceptible to dropouts. This is due to a patented cross-polarized design. It provides a diversity solution in a single package. It combines one log-periodic dipole array (LPDA) and one dipole antenna in an orthogonal (right angle) configuration. Here, one element captures vertically polarized waves, and the other horizontally polarized waves.

Unlike traditional “paddle” or “shark fin” antennas, the Diversity Fin allows receivers to see a constant signal regardless of microphone orientation. Thus, it allows the user to hold a wireless microphone in any position relative to the antenna without signal loss. These antennas interface with RF Venue’s DISTRO4 and DISTRO9 distribution amplifiers. These feed RF to multiple wireless microphone receivers of any brand.

Additionally, the DISTRO4 has dual inputs that combine the two outputs of the Diversity Fin Antenna. This helps distribution to up to five wireless microphone receivers, along with regulated 12 VDC power. Furthermore, six DISTRO4s can be connected together to feed up to 25 receiver channels. Likewise, the DISTRO9 features dual zone inputs for reception from dual Diversity Fin Antennas. Its nine outputs can be used to directly feed wireless mic receivers. Or it can feed the inputs of additional DISTRO9 units to feed up to 81 receiver inputs.

Success of the Installation

Mulcahy implemented RF Venue products throughout most of Vox Church’s campuses. He is also adding more as opportunities present themselves. Thus, he plans to create a “soup-to-nuts reliable infrastructure for wireless.” At the same time, he adds, RF Venue allows him to use any wireless microphone and IEM systems. Vox Church is using Shure ULX-D for the former and Sennheiser IEM G4 for the latter.

“Antenna choice, placement, and management are the most important aspects of wireless, and RF Venue has made those aspects easy to take care of,” Mulcahy remarks. “At our New Haven campus we have as many as six channels of wireless microphones and 12 monitor mixes each Sunday.” He discloses that there were 16 IEM mixes, plus eight handhelds for the 10th anniversary show in September. The event took place at the Westville Music Bowl in New Haven, Conn. “…And never a single drop out. RF antennas aren’t the glamorous part of audio, but, without them, there’s no show. With RF Venue, there’s never a drop out,” Mulcahy concludes.