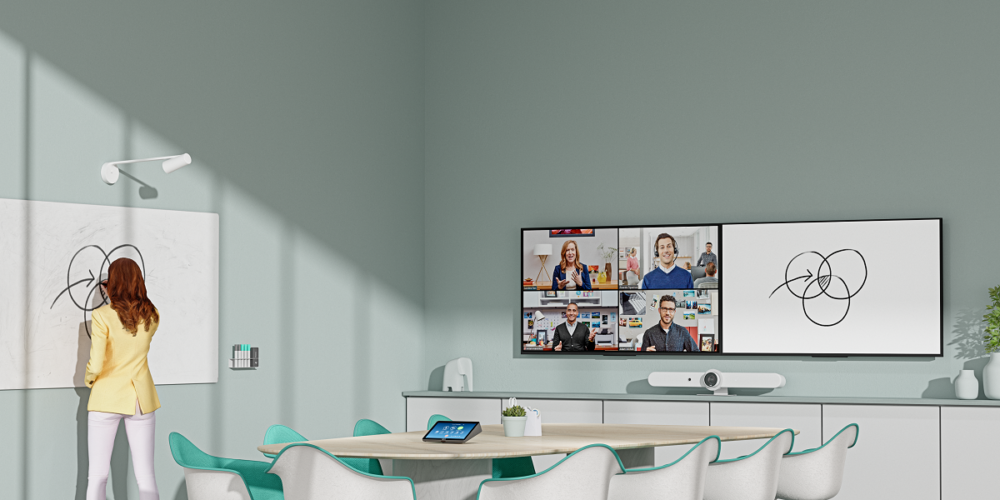 Logitech has released Logitech Scribe, a new AI-powered whiteboard camera designed for hybrid work and learning that works with videoconferencing services like Microsoft Teams and Zoom.

The company is marketing the camera, which starts at $1,1999, to hybrid offices and classrooms using Microsoft Teams Rooms or Zoom Rooms to give learners and hybrid workers a perfect view of the board regardless of where they are.

According to Logitech, the wall-mounted camera features enhanced integrations with rooms built around either platform. It allows in-room participants to share whiteboard content in video meetings by pressing a wireless button or by tapping a meeting room touch controller like Logitech Tap.

The button currently works with Zoom Rooms and support for Teams Rooms is coming later this year. The camera also works as a USB content camera with “virtually any conferencing application,” according to the company.

Logitech says Scribe captures dry erase surfaces up to 24 square feet and uses built-in artificial intelligence to render the presenter transparent so users can see the whiteboard with nothing in the way. Color of markers is automatically enhanced so content is easier to read. It can also detect other non-digital content like Post-It notes.

Scott Wharton, general manager and vice president of Logitech Video Collaboration, said in a statement that there is a gap in integrating non-digital content into virtual meetings.

“Logitech Scribe works because it takes advantage of what people already know how to do: pick up a marker and draw on a whiteboard,” Wharton said. Now, we’re able to elevate non-digital collaborative content for everyone to see in high fidelity, while being extremely easy to use and share, thanks to its compatibility with today’s most popular cloud services like Teams and Zoom.”

It is currently compatible with Teams Rooms on Windows and Zoom Rooms. Zoom Rooms Appliances support will be available after launch. For virtually any video conferencing service, Scribe can also operate as a standalone USB content camera when connected to a computer or laptop.