Named one of the nation’s best children’s hospitals by U.S. News and World Report in its 2019-20 rankings, CHOC Children’s Hospital is committed to providing the highest quality pediatric care. For over 55 years, CHOC Children’s has striven to nurture, advance, and protect the health and well-being of children.

Today, over two million children throughout Southern California count on CHOC to be there during life’s most critical moments; regardless of their family’s ability to pay.

Because cellular connectivity is the most secure method for accessing the internet, it has become a critical component to providing quality patient care at most hospitals.

Doctors, nurses, administrators, and patients at CHOC would often complain about the poor cell signal reception they experienced in different parts of the hospital; regardless of mobile carrier.

Parents of patients regularly used their phones in an effort to keep family members apprised of their child’s condition. At times, this lack of cell reception was merely an inconvenience.

At other times, the inability to call or text inside the hospital became a source of frustration and anxiety. The inadequate cell coverage was most pronounced in the basement tunnel connecting two of the buildings that comprised the CHOC campus.

Being an area where patients were transferred from the ER, this was deemed one of the most critical locations for improved cell connectivity.

In response to the complaints, CHOC explored a variety of solutions; looking closely at several vendors and pricing options. Ultimately, they even submitted an RFP for an Active DAS system. 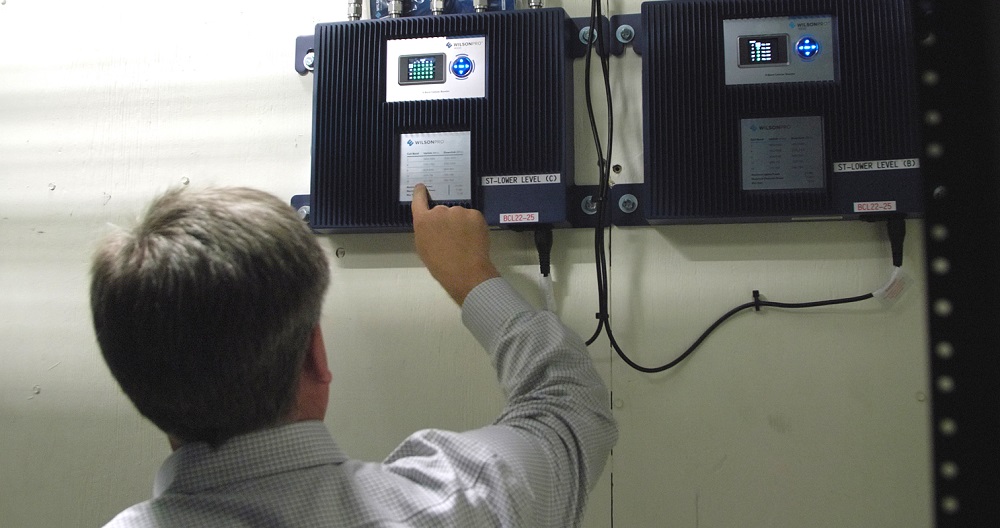 CHOC reached out to WP Electric & Communications, Inc. Given the scope of the project, they recommended a WilsonPro passive DAS system to effectively enhance cell coverage for the entirety of the 450,000+ sq. ft. campus.

Robert Trimble, a business development liaison for WP Electric, put together a plan with Wilson engineers to address the challenges CHOC campus would face to overcome bad cell reception.

For CHOC, the deciding factor was knowing that a WilsonPro system could distribute the signal for multiple carrier networks throughout the hospital in a centralized way.

Unlike an Active DAS system, a WilsonPro cellular amplifier solution didn’t require any additional equipment or maintenance for each provider and could boost signal for all carriers.

WP Electric’s expertise with cabling systems and working knowledge of WilsonPro cellular amplifiers would prove to be a plus, since the installation would extend from CHOC’s basement to its penthouse floor.

In total, roughly 370 Wilson dome antennas, 34 WilsonPro amplifiers, and about a million feet of coax cable was installed. Initially, CHOC’s facilities team was concerned about the complexity and scale of the installation.

However, WP Electric gained their trust by successfully completing their cabling throughout the lower levels of the main building, with zero disruptions or issues.

WP Electric had estimated that the CHOC project would take six months from initial site survey to complete installation. In reality, they would finish the job an entire month ahead of schedule.

By installing a WilsonPro cellular amplifier solution instead of an Active DAS system, CHOC also benefited from a cost savings of 80 percent. The Impact To the excitement of all around, the difference in cellular connectivity was noticed right away.

Related: Designing and Implementing Technology at OUR New Office

Employees were overjoyed to receive text messages while sitting at their desks; an occurrence for some which had never happened before the WilsonPro installation.

Others took immediate notice when they got a signal in areas of the hospital where they never expected service before. Amazingly, some even streamed video in areas of the building that had zero cell signal before.

For a hospital like CHOC, the importance of cellular connectivity was always about the patients.

“This new (WilsonPro) cellular system will not only save lives, but it will also keep families close together. They won’t have to go far to make cellular phone calls and doctors will be able to get information to patients quicker,” said Robert Trimble, a business development liaison for WP Electric.

“With Wilson’s technology, it’s a one-stop shop. You flip the switch and it works. It’s why Wilson is our number one manufacturer today.”