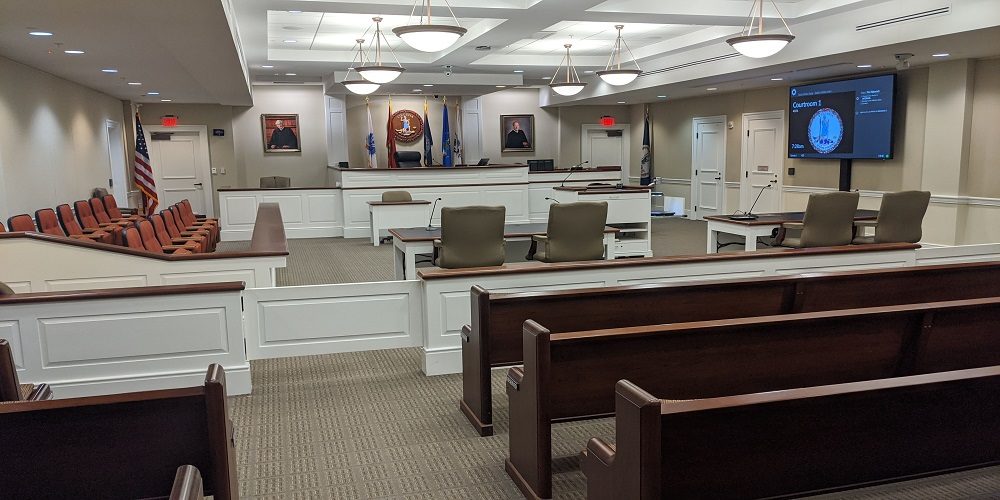 Located in one of the fastest-growing counties in Virginia, the Spotsylvania County Circuit Courthouse has a full docket nearly every day. To keep the cases moving in a timely fashion, the judges, legal teams and courthouse staff depend on a fully integrated audiovisual (AV) system to facilitate trials and manage their workloads.

The courthouse required a new AV solution that was reliable, stable, easy-to-use, required minimal operator training and could be monitored remotely by a managed services partner. The county met all their needs through a new relationship with Unassailable Solutions LLC, which now has a five-year contract to provide and manage the county’s audiovisual technology.

Prior to the contract with Unassailable Solutions, the Spotsylvania County Circuit Courthouse had been using a patchwork AV system since 2010. The equipment provided bare minimum AV support with many shortcomings.

Jane Reeve, CIO of Spotsylvania County, struggled with keeping the system stable and functional for more than a few days at a time, and with no management platform providing alerts and notifications. The courtroom technology was being managed reactively until the systems could no longer provide any level of required functionality.

According to Reeve, the original AV system never worked to its full potential, went down often, and was not suitable for conducting courtroom presentations. Prosecutors and defense teams struggled to present evidence using this system, which often disrupted the tempo of hearings, and judges often had to change courtrooms due to malfunctioning equipment and limited system capabilities.

Reeve approached Unassailable Solutions with the courthouse’s list of AV system requirements: reliability, stability, ease of use and redundancy. The county also needed a system that they could potentially support on their own without having to rely on a programmer and could also be monitored remotely by a managed services partner like Unassailable Solutions.

This included equipping the courtrooms, jury assembly rooms, jury deliberation rooms, holding cells and a closed-caption room used to protect witnesses. The next step was an extensive building survey and evaluation of

architectural drawings. Unassailable Solutions began developing a technology solution that would fulfill everyone’s demands, a task made more challenging since there were no “as-built” drawings of the current AV system or supporting infrastructure.

Unassailable Solutions’ extensive background in designing AV systems and enterprise software provides its customers with the unique expertise and solutions necessary for building turn-key AV systems from design to installation to maintenance.

Jason Jaworski, CTS for Unassailable Solutions, decided the courthouse would benefit from the customer-driven features of the Utelogy U-Manage system, with robust software-based control and a monitoring platform that could easily be configured by an end-user for real-time and remote maintenance.

Related: What Business Uses Will AI Have in 2021?

Troubleshooting its previous system required someone to be on-site and often took several hours. Real-time communication is also vital to the courthouse’s success, as is having the ability to quickly identify and resolve potential problems before court begins each day.

After assessing the needs of each stakeholder, Unassailable decided a system capable of wireless and wired control would reduce the risk of outages during a hearing by providing two paths of communication.

This would also allow the judge’s assistant to quickly un-dock a wireless tablet from its magnetic charging station to mute microphones, mute a display or change camera views. Leveraging the Utelogy U-Manage Portal, Unassailable ensured they would be notified of any device communications issues via email before they were noticeable by the court staff.

The Utelogy system delivers alert notifications that allow users to check the server from anywhere and free the judges from worrying about system failures while court is in session.

Jaworski and Unassailable also identified several other instances in which an integrated AV solution would help streamline the court’s workload.

For example, Jaworski integrated the courthouse’s new system to work with the Polycom platform used by the State of Virginia to conduct video arraignments. Now the county has instant access to the state’s directory services, allowing them to quickly establish communications with any system on the network through a common name lookup, and bookmark favorites through the Utelogy user interface.

Standardizing video arraignments allows judges to process inmates more efficiently, reducing manpower and costs by not requiring transports to be staffed by deputies.

The technology that the courthouse was choosing as a long-term solution also yielded immediate short-term benefits when the COVID-19 pandemic moved all in-person interaction online.

Each courtroom operates independently though all are interconnected through a redundant stack of Netgear switches optimized for AV over IP. Each of the three courtrooms can conduct a video-teleconference without disrupting the other courtrooms and each courtroom has

The courthouse has holding cells where prisoners are detained while awaiting their hearings. One cell had been designed with a high-security window to allow an individual to watch their hearing.

This one cell also had a speaker and a microphone integrated into a high-security perforated steel ceiling, but they were ineffective as courtroom tools due to unintelligible audio. This holding cell was only available to one courtroom. If a judge moved an individual to this cell from a different courtroom, the trial would then have to change rooms for that individual to witness the hearing to preserve due process.

Jaworski proposed using the holding cell as a shared resource for all three courts and installed a monitor in the cavity between the glass and doors that opened up in the courtroom.

He also repositioned the microphone to optimize the audio through the use of a cutting-edge audio digital signal processor (DSP) technology. Through the Utelogy platform, this new “Shared Resource” feature was quickly put through the development and QA process.

To uphold the security, privacy and integrity of the hearings being conducted in other courtrooms, Unassailable, in collaboration with Utelogy, developed the feature so that no two courtrooms could access the shared resource simultaneously.

The Impact of the Utelogy System

Additional logic built into the Utelogy platform is used to check the status of all resources each evening, returning the courtrooms to a shutdown state and all shared resources to the resource pool. 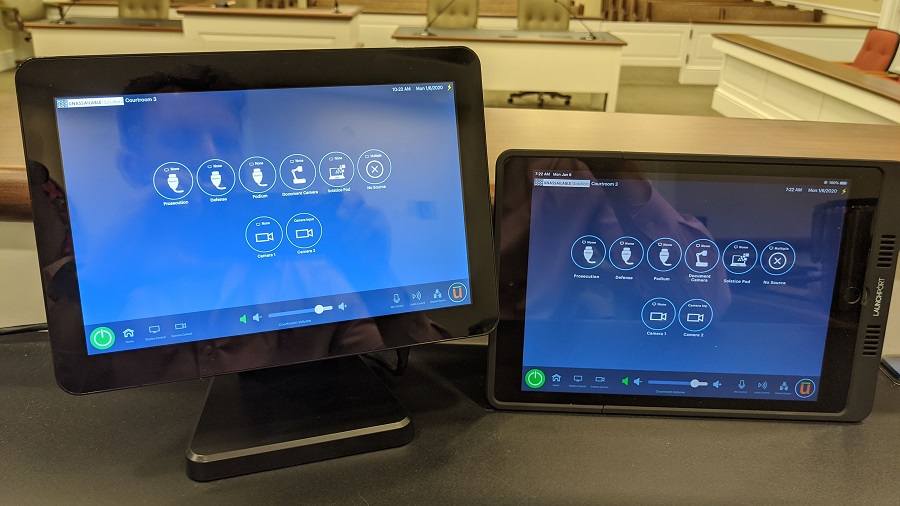 The new technology demonstrated its value when a connection issue occurred in the courtroom.

The Utelogy platform alerted the Unassailable team in the middle of the night and they had a technician onsite by 7:00 am to repair the issue before court began for the day.

With the previous technology, the issue would have been discovered during the day while court was in session, causing a disruption to the entire schedule.

“The U-Manage notification alerted me to a device being offline,” said Jaworski.

“I was able to correct it before the day began, and it was fixed in a matter of minutes and never interrupted operations.”

County CIO Jane Reeve can now easily review reports, data and dashboards from the Utelogy system interface with the peace of mind that comes from knowing the courtroom technology is now one less thing for her team to worry about.

The county didn’t provide the Unassailable team with much time to tackle the challenging task of decommissioning an antiquated system and installing a fully functioning modern AV system.

Jaworski and his team installed the system over a few weeks during the 2019 holiday season. Work started on December 21 with many unknowns in terms of cable pathways and existing infrastructure. By January 6, 2020, the new system was ready to go.

Jaworski taught the judge’s assistants the system’s basics in about 35 minutes, and later spent an additional 90 minutes educating the rest of the stakeholders.

Even with this brief training, everyone felt confident enough to handle the new AV solution. Over the next few weeks Unassailable collected feedback from the judges and judges’ assistants on the Utelogy UI and what changes they would like made to the system.

Working closely with the circuit court, Unassailable continually optimized the user interface experience to improve ease of use.

The courthouse began using the system immediately after installation, with no major issues or staff complaints. Since the integration of Utelogy, the Spotsylvania judges no longer worry about disruptions and delays, and they don’t have to postpone trials due to AV system failure.

Remote access and monitoring are perhaps the greatest advantages and the versatility of the system makes it sustainable for many years to come. Jaworski said, “The flexibility we’ve given them for using shared resources is really the biggest benefit.”