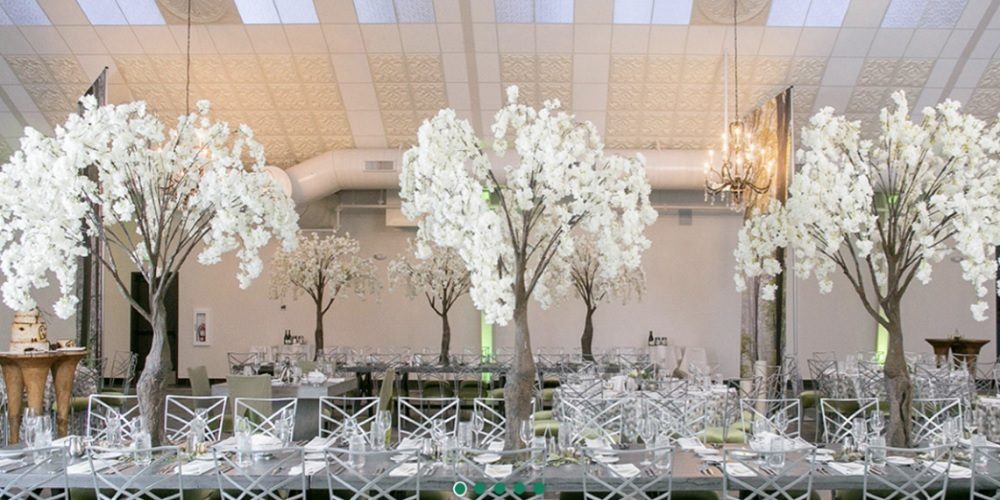 The ballroom at Bavaria Downs was designed for weddings. One of its biggest attractions is a luminous ceiling that plays an active part in the festivities.

When conceiving the new ballroom for Bavaria Downs, designer Ed Hawksford knew right from the beginning that he wanted to do something special with the ceiling. “I wanted the impression of a Lalique glass ceiling from the 1920’s, backlit with color-changing LEDs,” he says.

The owner had been thinking about a large field of skylights, but even one narrow row of skylights proved to be prohibitively expensive and would not really give the look and function he wanted. Hawksford suggested a luminous ceiling that was an ingenious merging of traditional style and contemporary technology, saved money, and added versatility.

The space between the ceiling and the insulated roof above it has limited height. Lighting designer Scott Wexler, president of Wex-Tech, was concerned that LED lights so close to the panels would not be evenly diffused, and could cause hotspots on the luminous ceiling.

To test it, Wexler constructed a simple lightbox using a 24-inch by 24-inch cardboard carton, and duct-taped the thermoformed panel over the end of it. He found, to his surprise, that he could bring the light source to less than six inches away from the panels and still get even, diffused light.

Even though the ceiling is sloped, it uses a conventional 2-foot by 2-foot T-bar suspension grid seen so often in flat ceilings. The central portion of the ceiling is laid out in a series of luminous sections made of translucent Ceilume Doric style acoustic panels, a geometric design with numerous angled, light-catching facets. The sections are 14 feet wide, meeting at the peak. They are separated by 2-foot wide strips of opaque white panels.

The lower parts of ceiling are opaque Sand-colored Ceilume Florentine panels. An ornate, deeply-detailed floral design reminiscent of 19th Century decorative plaster, they add a note of traditional style to the room. Hawksford describes the overall intent of the ceiling was “to make this building feel conservatory-like.”

The backlit translucent panels create a lush field of color above the room. The color can be changed for a range of effects. It can match the afternoon blue sky, or the orange-reds of sunset, depending on the time of the event. “If the bride’s got a color scheme,” Hawksford says, “We can theme the ceiling to match her colors. The lighting system can also be integrated with the sound system, so it can work like an old disco ceiling.”

Hawksford selected Ceilume panels specifically because they allowed him to keep the fire-suppression sprinklers above the ceiling, without having to penetrate the luminous panels and spoil the ‘skylight’ effect. Ceilume ceilings are approved for use beneath sprinklers because they are ‘drop-out’ panels. In the event of fire, heat softens the thermoformed panels so they deform and drop out of the ceiling grid, allowing the sprinklers to activate.

The ceiling has proved to be a popular success, and something of a sales tool in booking events into the venue. “It’s a bonus: look, you get this beautiful upgrade,” says former Director of Venue Operations, Georgia Meyer. “Clients look at it as a décor they don’t have to invest in. It brings a value plus.”

Typically, the ceiling will be colored to match the wedding’s scheme during the ceremony and speeches. “When the dancing starts,” says Meyer, “we let it just roll and run, this spectacular light show that is included. The reaction from clients and guests is just fantastic.”