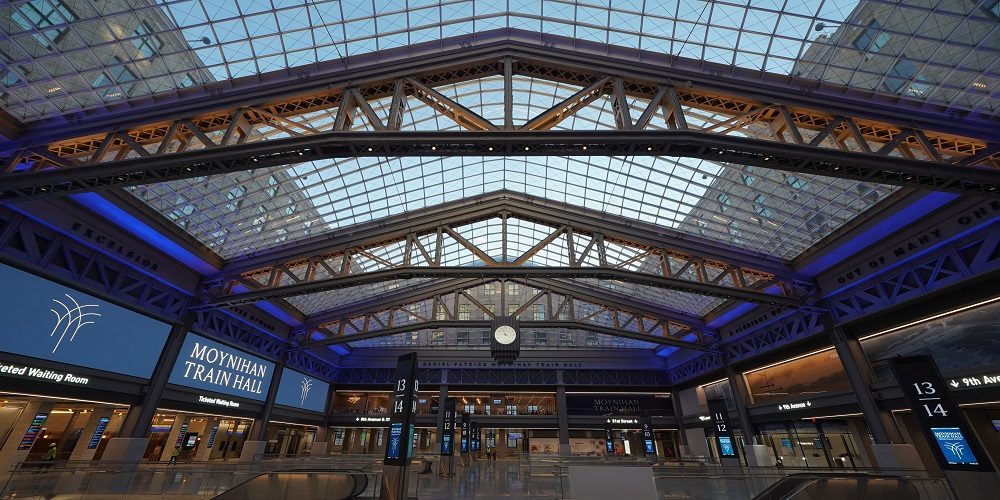 The James A. Farley Building in Midtown Manhattan was the main United States Postal Service (USPS) building from its opening in 1914. Added to the National Register of Historic Places in 1973, it was officially renamed after James Farley, the 53rd Postmaster General in 1982. In 2002 the USPS sold the building to the New York state government to make way for the Moynihan Train Hall which was opened on January 1, 2021.

The Moynihan Train Hall is an expansion of NYC’s Pennsylvania Station into the James A. Farley Building and provides a beautiful new access to most of Penn Stations’ platforms for Amtrak and Long Island Rail Road passengers, serving 17 of the station’s 21 tracks. 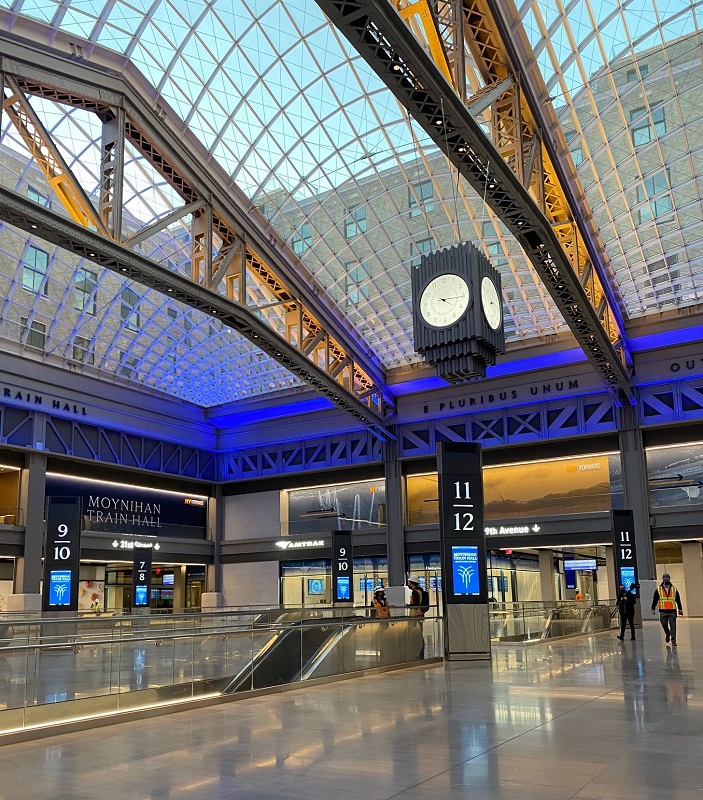 The $1.6 billion renovation historically restored the building, added a central atrium with a glass roof and includes retail space, a 320-seat waiting area, public bathrooms and three areas with works of art.

When Thomas DePace, CTS, COO & Sr Engineering Manager for Advance Sound Company, saw the audio specifications in the RFP, he knew SoundTube’s CM82-EZ-II and CM62-EZS-II ceiling-mount loudspeakers were perfect for the job due to their tensioned wing system, color coding, response and the minimal depth of the CM62-EZS-II speakers.

Although the local transit authority originally considered another brand, DePace convinced them that the SoundTube products would give better sound quality with a higher level of intelligibility and provide better budget outcomes with the vast number of loudspeakers needed for the job.

Demolition on the train hall began in 2012 and Advance Sound Company, a SoundTube dealer since the 1990’s, started the project in 2018 and was tasked with the audio installation for the expansive hall.

With the addition of a Symetrix Prism 8X8 Processor, Advance Sound Company gave the train hall the opportunity to utilize the audio system for digital signage audio or audio performances in the future.

Advance Sound Company created a 164-zone Dante system to manage the audio that was installed between June and December 2020.

“We designed a custom work cabinet with carpeted shelf and foam dividers to deliver zones of speakers at a time. This eliminated on site waste, as well as allowed our office technical staff to tap and test speakers and safety cable prior to delivery to the site. With the intense security protocols in place to bring product into the building, we had to make it as easy as possible to get through the intake inspection to prevent job delays,” says DePace. 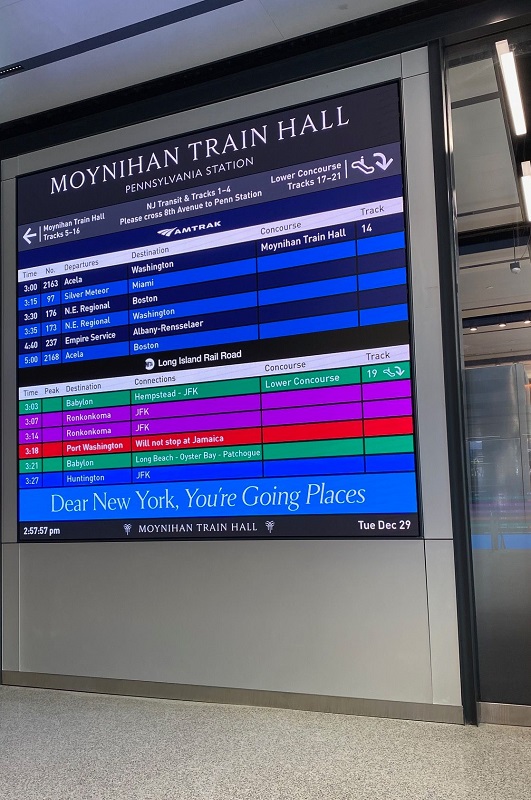 “In addition to the high-level security requirements, we also had COVID-19 procedures to follow. It was a very condensed time frame for such a large installation under normal conditions.

“Architectural design caused varying ceiling types, so it was important that we had adjustable speakers that had the same voicing in all the areas. Speakers installed in the tech panels were black, while speakers in gypsum ceilings were white, and speakers in custom wood ceilings were custom painted beige,” says DePace.

“Speakers in the main train hall had to be hidden behind HVAC louvered diffusers.

“They also had to be specifically aimed and panned accordingly. As such we enlisted the help of Polar Focus to design a custom beam mount bracket that could be adjusted to appropriate depths and angles.”

Coverage and frequency response were the most important specs that allowed for an even and intelligible audi0 system.

MSE Audio’s color-coded backboxes and tiles bridges assisted the installation team to match the previously installed bridges to the appropriate speaker and diameter.

“Since we’re still under COVID-19 restrictions, Moynihan Train Hall is operating at 25% of capacity,” says DePace.

“This reduced volume of passengers required us to lower the overall building audio volume. It’s amazing to hear how clear and precise the sound is regardless of the volume. With the high ceiling heights, we’re even able to get the reverberation level to under two seconds. That says a lot about the product quality.”