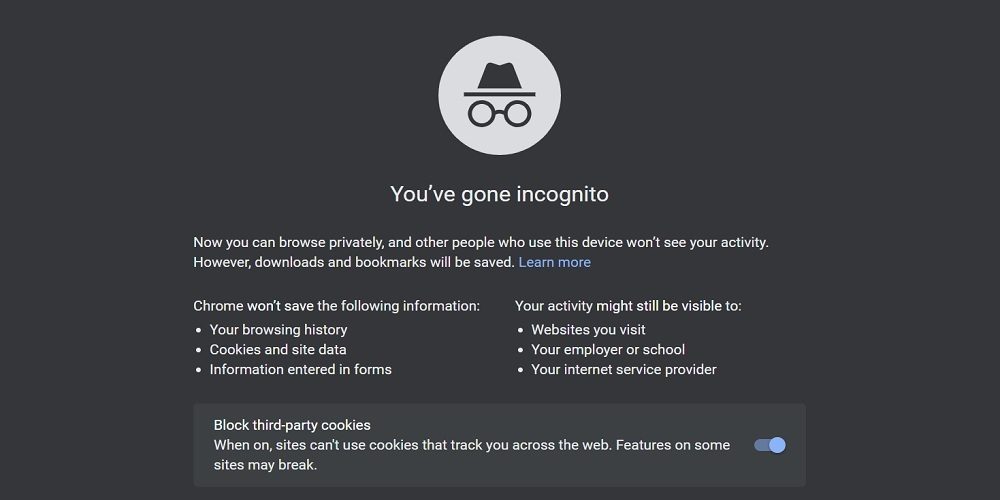 A US District Court Judge rules that a lawsuit involving Google Chrome’s Incognito Mode may proceed.

The suit claims that the Chrome feature should stop Google’s web tracking, and that failure to do so violates wiretap laws.

Google attempted to get the lawsuit thrown out on the basis of Chrome’s Incognito explainer, a message that shows every time you start up Incognito mode and explains that “your activity might still be visible to websites you visit.”

That was not enough for the judge, however. “The court concludes that Google did not notify users that Google engages in the alleged data collection while the user is in private browsing mode,” Judge Koh wrote.

Incognito mode doesn’t use your existing cookie store and, at the end of the session, dumps any cookies, history, and autofill data that were generated—that’s it. It doesn’t change the way websites work.

What do you technology-inclined folks think? Is Google culpable for not making sure Incognito browsers blocks web tracking?

Google has claimed on multiple occasions that users can browse the web privately and remain in control of what information they share with the tech company. But the lawsuit claims this is fundamentally false, saying “Google continues to track, collect, and identify browsing data in real time, in contravention of federal and state laws on wiretapping and in violation of consumers’ rights to privacy.”

“We strongly dispute these claims and we will defend ourselves vigorously against them,” a Google spokesperson told Bloomberg after the ruling. “Incognito mode in Chrome gives you the choice to browse the Internet without your activity being saved to your browser or device. As we clearly state each time you open a new Incognito tab, websites might be able to collect information about your browsing activity during your session.”

Whether it works out in their favor or not, the Google Chrome Incognito Mode lawsuit raises some interesting questions about how much control Google has over browser’s data.