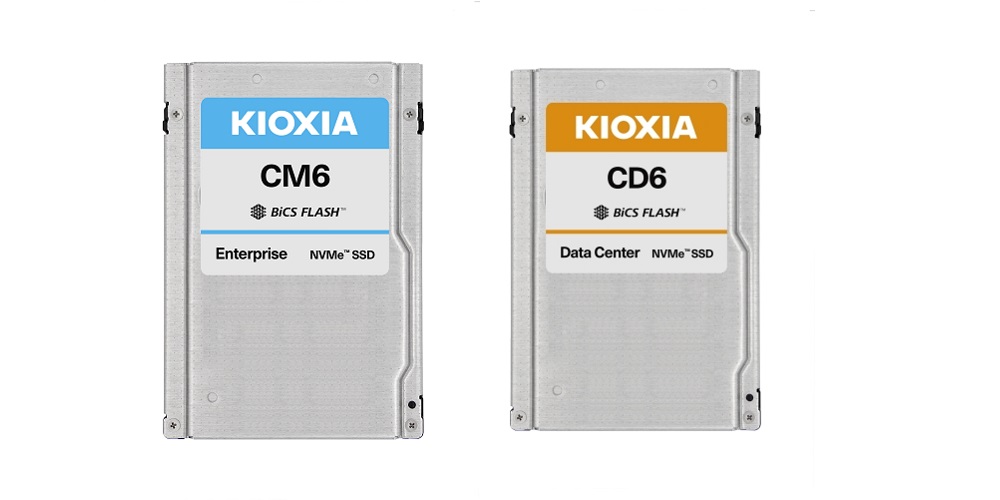 The PCI Express 4.0 specification was designed to double the performance of server and storage systems, pushing speeds up to 16.0 gigatransfers per second (GT/s) or 2 gigabits per second (Gb/s) throughput per lane, and driving new performance levels for cloud and enterprise applications, according to manufacturer KIOXIA.

The CM6 and CD6 Series SSDs are compliant to the latest NVMe specification, and include features such as in-band NVMe-MI, persistent event log, namespace granularity, and shared stream writes.

Additionally, both drives are SFF-TA-1001 conformant (also known as U.3), which allows them to be used in tri-mode enabled backplanes, which can accept SAS, SATA or NVMe SSDs.

“AMD is leading the PCIe 4.0 charge with AMD EPYC, which is poised to bring in a new era of compute, graphics, networking, and storage in the data center,” said Raghu Nambiar, corporate vice president, Datacenter Ecosystems & Application Engineering, AMD.

“We are pleased to work with KIOXIA and their PCIe 4.0 NVMe SSDs demonstrating industry leading performance and TCO while creating new application value for our customers1.”

“A new wave of storage technology is coming with the introduction of PCIe 4.0 devices that will bring next-generation performance to enterprise and hyperscale data centers,” said Jeff Janukowicz, research vice president at IDC.

“U.3 Solid State Drives , such as KIOXIA’s CM6 and CD6 Series, will help enable customers’ transitions to PCIe 4.0 and grow PCIe SSD unit shipments to over 50% of the enterprise market.”

Dual-ported for high-availability, KIOXIA’s CM6 Series of PCIe Gen4 (1×4, 2×2) and NVMe Enterprise SSDs delivers sequential and random performance of up to 6.9 GB/s and up to 1.4M IOPS (input/output operations per second).

These represent bandwidth improvements of up to 2x over its PCIe Gen3 predecessors and are 12x faster than typical SATA drives, the company says.

Both the CM6 and CD6 Series include a broad range of security and encryption options, including Self-Encryption (SED) and FIPS, and are on the UNH-IOL Integrator’s list for NVMe 1.4 device compatibility. The CM6 has successfully passed PCI-SIG Workshop compliance.

Related: Cloud Computing and Security: The Risks You Need to Know

“For more than a year, OEM customers have been providing cutting-edge storage performance to end-users thanks to KIOXIA’s CM5 and CD5 Series NVMe SSDs,” noted Alvaro Toledo, vice president of SSD marketing and product planning at KIOXIA America, Inc.

“We’re continuing our commitment to lead in the NVMe space by delivering the fastest available 2.5-inch4 PCIe  U.3 Solid State Drives solutions.”